24 members of the Band travelled to Belgium for a 6 day concert tour. Performances were carried out in De Haan and Nieuwpoort as well as in front of The Cloth Hall, Ypres.

After performing outside The Cloth Hall the Band marched through the streets of Ypres to The Menin Gate to take part in The Last Post Ceremony, an event that has been carried out every evening at 8.00pm since 1928 with only a break for WWII

The Band provided the music for the ceremony and the four youngest members of the Band laid wreaths on behalf of the Band and The Royal British Legion, Horley Branch.

Members of the Band also paid their respects to the fallen of the First World War at the Essex Cemetery, Tyne Cot Cemetery, and the Langemark German Military Cemetery. 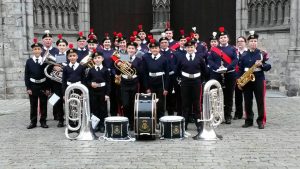 The Band wishes to acknowledge the support of Mr David Stanley of The Plough Public House, Redhill with his sponsorship of the Band for 2015. The sponsorship received will help the Band continue to educate the young people of Reigate & Banstead and the surrounding areas in the playing and performing of music.

Once again the Band took part in the Eschweiler & Durwiss Karneval weekend taking part in the Princes Parade, ‘Prinzeampfang em Roothuss’ on Saturday, Durwiss Karneval on Sunday and Eschweiler Karneval on Monday as well as performances in The Town Hall and The Burghof Sitzung. The weather was again sunny and cold and this resulted in crowds in excess of 250,000 watching on ‘Rosenmontag’, Roses Monday. 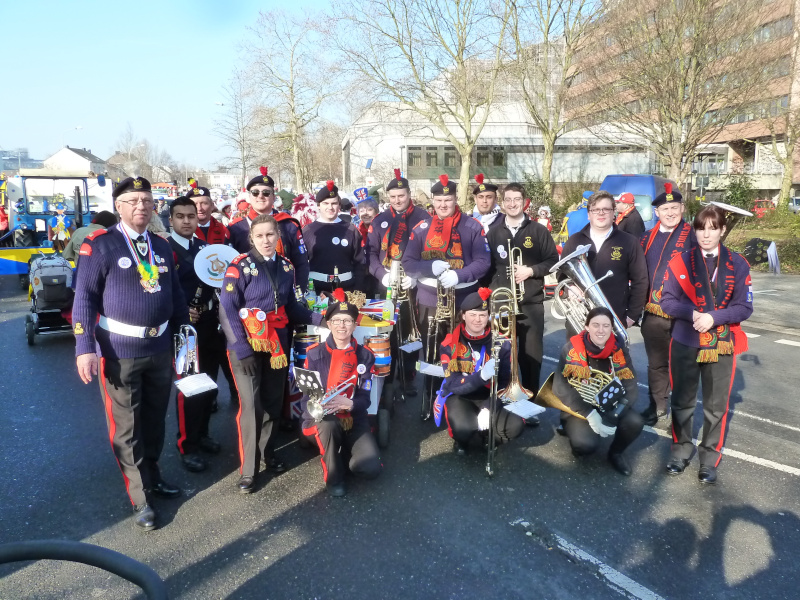 Local Band is a hit in Germany at Karneval Weekend 2014

Members of the Redhill Corps of Drums & Band recently travelled to the twin town of Reigate & Banstead to take part in the annual Eschweiler and Durwiss Karnevals. For the first time in many years the weather was dry and sunny. 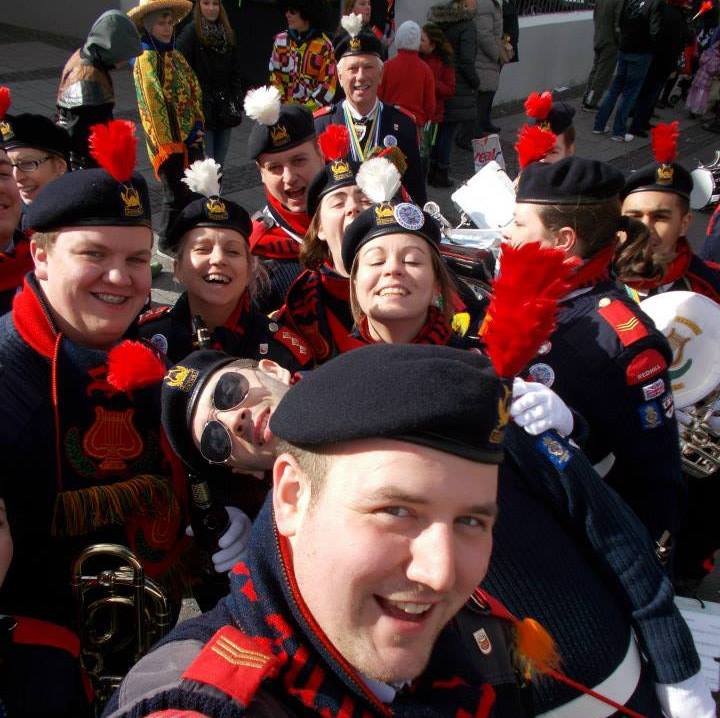 The Band has had links with Durwiss since 1983 before Twinning with Eschweiler was officially recognised and this year’s visit marked the 30th Anniversary of the first visit by the Band to Eschweiler and Durwiss. 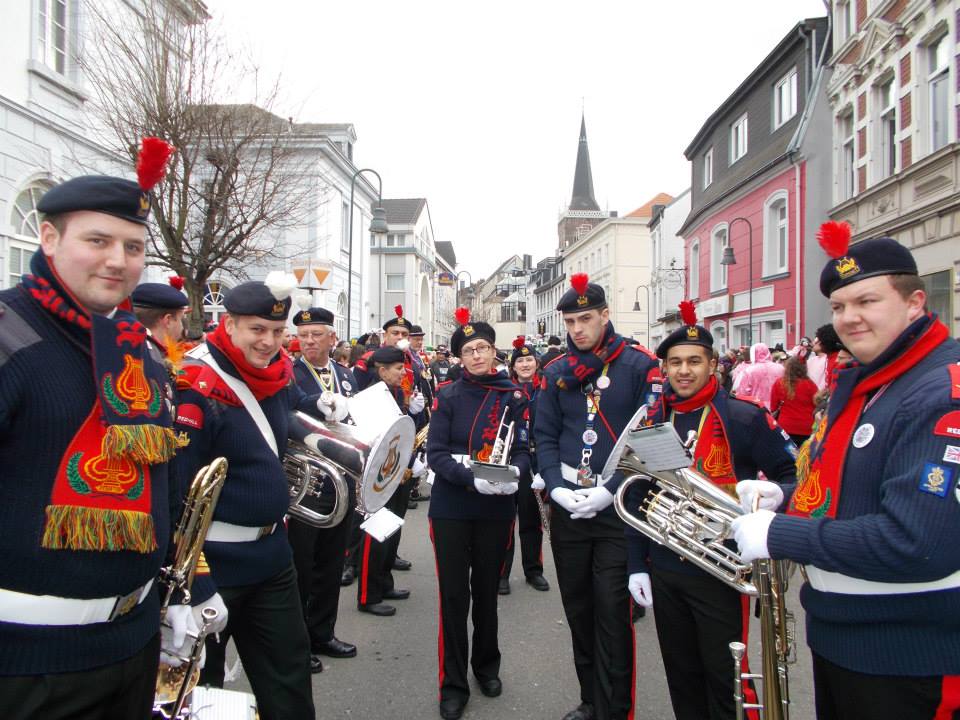 During the course of the weekend the Band took part in 3 Parades and carried out 4 stage performances. Included in these performances was taking part in the ‘Prinzeampfang em Roothuss’, Princes Parade to the Town Hall, where after the entrance of Prince Christian III the Band opened proceedings. The Bandmaster David Edge received an award from the Karneval Committee in recognition of attending Karneval for 25 years.

The Band performed mainly German Karneval music which was enthusiastically received by the large audiences. The number of people watching on ‘Rosenmontag’, Roses Monday, is estimated to be between 200,000 to 300,000 and over 5,500 take part. The Eschweiler Karneval is considered to be the third largest in Germany.

In a very busy November for the Band including Remembrance Sunday, Annual Show Night and Bonfire Night the Band joined forces with the other member Bands of the National Youth Marching Band to take part in 2 major events.

On Saturday 9th November the Band joined up with Rubery Youth Marching Band, Halesowen Scout & Guide Band, Spen Valley Scout & Guide Band and Thurmaston Scout & Guide Band to take part in a very wet and cold Lord Mayor of London’s Show. Despite the weather the N.Y.M.Band performed to it’s usual high standard with the Band’s Marshall commenting that the Band played far more than any other Band he had accompanied. Despite wet uniforms everything was dried ready for Remembrance Sunday the day after. 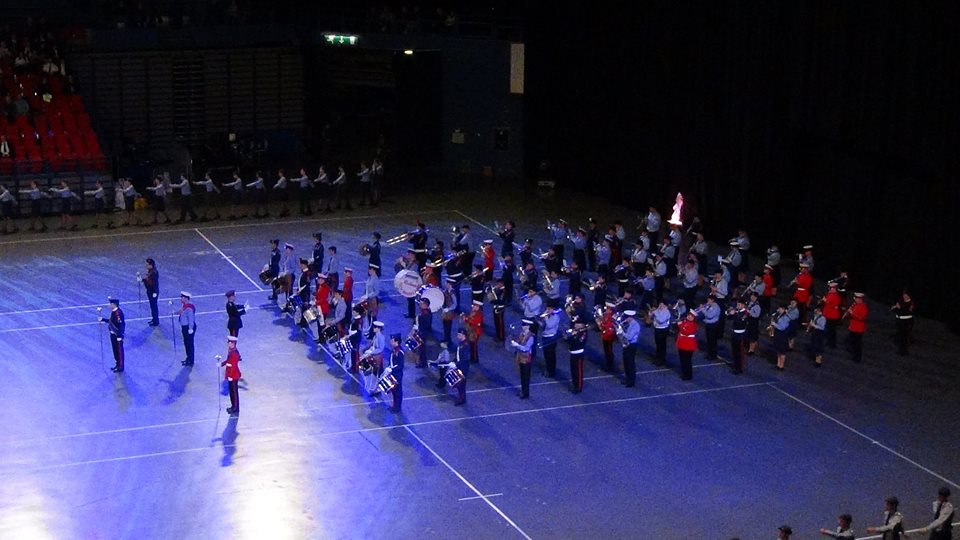 On Saturday 30th November the Band travelled to Birmingham to meet up with all the Bands present at the Lord Mayor of London’s Show plus Moreton Boys & Girls Brigade Band and Bournemouth Scouts to take part in the 25th Birmingham International Tattoo. Despite no prior rehearsals the Bands soon were playing to a very high standard. The N.Y.M.Band’s Musical Director, Major Paul Norley of The Band of The Brigade of Gurkhas was amazed at the sound being produced by the Band and felt privileged to be associated with Band. 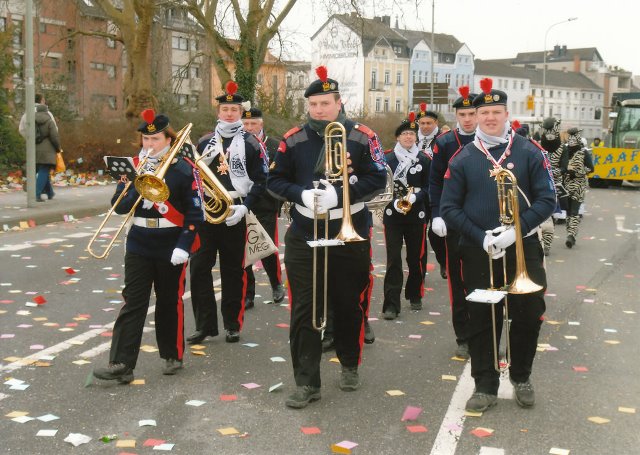 Members of the Band travelled to Karneval to join up with ‘Brass on Spass’ for the Durwiss and Eschweiler Karnevals. The weather was extremely cold with MINUS 10 reported on Monday. As well as performing with ‘Brass on Spass’ in both Karnevals the Band’s performed together on stage in the Festhalle in Durwiss. 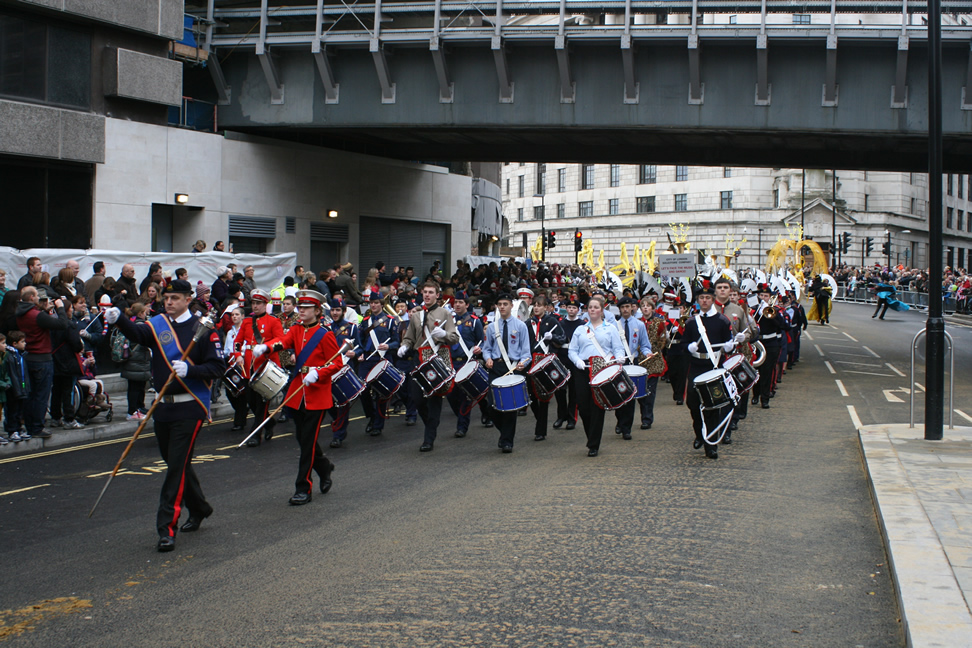 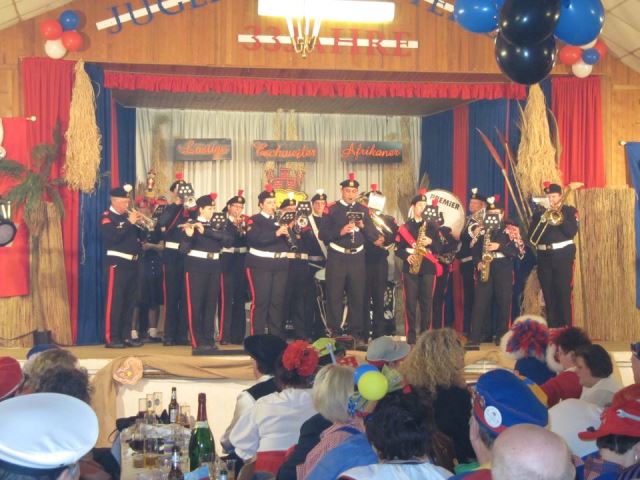 Members of the Band travelled to the twin town of Reigate & Banstead to take part in the annual Eschweiler and Durwiss Karnevals. In addition to these the Band also performed at the Burghof Sitzung in Eschweiler on Saturday evening with a standing ovation for the Percussion Section with their ‘Drumming in the Dark’ routine.

The weather was very cold on Sunday with snow before and after the Durwiss Karneval. Before the Karneval the Band performed with ‘Brass on Spass’ as part of relationship building exercise which went extremely well to the delight of both Bandmasters and the watching public.

Monday was still cold but was bright and sunny. There were in the region of 200,000 people watching and the Band was well received as it was playing Karneval music. As Die Kaafsack passed the Band at the end of the procession the Band joined in with them to perform ‘Der schmucke Prinz’ (Clown Prince) to the delight of Dieter Kaltenbach, Die Kaafsack Band Leader and the members of Die Kaafsack. 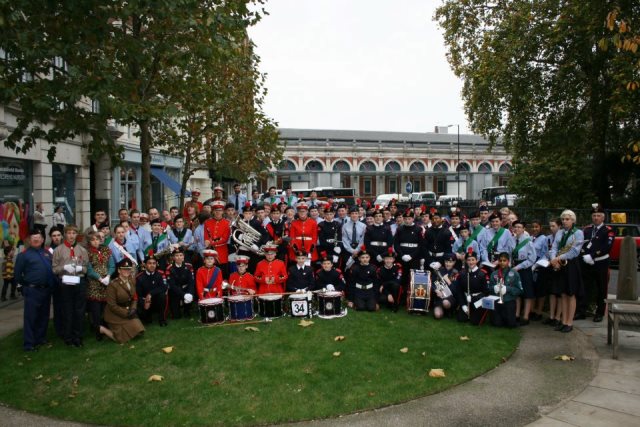 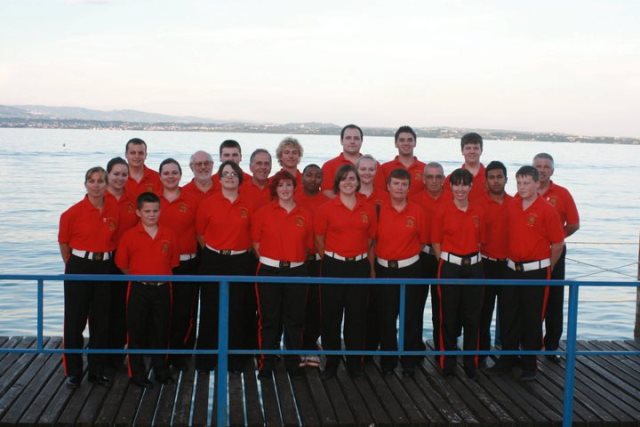 The Redhill Corps of Drums & Band have recently completed a 10 day concert tour to the Lake Garda Region of Northern Italy to mark the Band’s 30th anniversary. The Band of twenty-four pictured on the shore of Lake Garda in Sirmione completed three concerts in Sirmione, and Calavino and Garniga Terme high up in the hills around Lake Garda. The Band’s performances were warmly received in all three venues and wowed their audiences by performing typical Italian music as well as music from film and theatre.